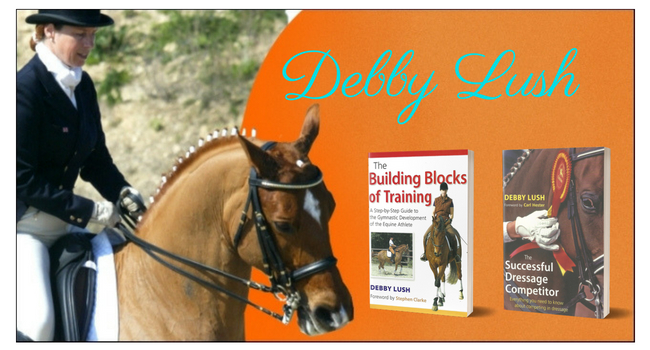 I graduated from Nottingham University with a BSc (Hons) in Animal Physiology, and had planned to do a post grad doctorate in equine embryo transfer (in its earlier days at that time), but ended up getting diverted into running a livery yard.

I rode and trained all manner of horses, specialising in retraining horses with problems (definitely a young person’s job), and pursued my passion for dressage when I could. I trained my all-rounder to medium, then took my next horse to PSG without really knowing what I was doing, and was surprisingly successful!

Then I joined the TTT (Training the Teachers of Tomorrow Trust – a wonderful training charity no longer in existence) and gained access to world class trainers Arthur Kottas (First Chief Rider of the Spanish Riding School) and Charles de Kunffy, International clinician and author. Through their education, I found the understanding I’d been searching for, and began training horses and riders with a knowledge based in classical riding, but geared towards competition. Later on, Stephen Clarke joined my trainers, bringing a judge’s perspective to the mix.

For 10 years I was Dressage Expert for HORSE magazine, answering readers questions and writing features. I am author of THE BUILDING BLOCKS OF TRAINING, and THE SUCCESSFUL DRESSAGE COMPETITOR, alongside writing fantasy fiction under the pen name Deborah Jay.

And now, the long version: my equestrian life has been quite a saga – be prepared for the ride!

I’ve always had a vivid imagination and, until I was 9 years old, I owned and rode a string of imaginary horses. I was a competitive swimmer (backstroke), competing for my club and training 2 or 3 nights a week. Riding lessons happened once a fortnight for half an hour at the local riding school. Then I was asked to make a choice: swimming or riding. It wasn’t hard! My mother was delighted – as a child she’d always wanted a pony, but living in London it hadn’t been practical, so now she could finally buy that longed-for pony.

She sold her fur coat to finance the purchase of Starlight (she always joked that she was exchanging one fur coat for another, but the new one had a pony inside it), and Star duly arrived from Cornwall where he had been working in a friend’s riding school. He was a disaster – a riding school pony through and through, he wouldn’t move without another pony in front of him. He was also traffic shy, and he dumped me with a sharp spook at precisely the same place on every hack. A month later he was sold to the local riding school and we went pony hunting.

After Star, my nerve was rather shaky, so my next pony was of necessity rather lazy. Marquis did a bit of everything, and would jump nicely at home, but at a show he knew 3 refusals meant he could leave the ring, so until I was 14 and really too big for him, that’s exactly what he did.

We’d always lived near Hickstead, so all my youthful ambitions revolved around show jumping. I was a very active Pony Club member, and mother became an Area Organiser so we could be assured of getting the best instructors, but by the time I was winning classes on 13.2hh Marquis, I needed something taller. Mum didn’t want to buy another pony for me to outgrow, so a 15hh coloured Irish cob called Mickey came next. With him I discovered hunting and Hunter Trials as well as show jumping, and represented my PC branch in Eventing. Dad also drove him – a true all rounder. 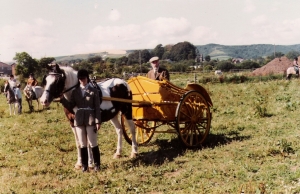 About this time I did my first teaching: Pony Club camp, where I had a class of 3 Shetlands and a Dartmoor. I was hooked.

Flight of Fancy was my first proper horse – a chestnut mare. We did everything – show jumped Newcomers and Foxhunters, Novice Eventing (back in the days when horse trials started at Novice), showing at County level – Working Hunters and Riding Horse – Dressage to Medium level, and Side-saddle showing and Equitation, qualifying for the National Championships, where we did the entire range from show jumping to handy horse classes as well as the Equitation Finals.

Fancy accompanied me on my Gap year, when I worked as a groom for event rider Annabel Scrimgeour, doing my Pony Club A test and my BHSAI. It was during this year that I saw two riders lose their horses to unfortunate cross-country accidents and decided that I didn’t want to risk my one precious horse. Mum was vastly relieved – she always supported me, but hated the risks of eventing and was delighted when I gave it up.

That year was also the start of my judging career – I began at a Pony Club event, with a class of under 10s doing a walk and trot test. By the time I went to Nottingham University I was judging unaffiliated Riding Club dressage, and that continued while I studied, as did my teaching. I captained my University team and after Graduating with a BSc (Hons) in Animal Science, I went on to judge University matches.

My plan at this point was to take a Postgraduate at the Veterinary research centre at Cambridge, working on embryo transfer, but while waiting for an opening to become available I took a temporary job instructing at the local riding school, then became involved in a livery yard venture, and somehow it never happened. I ran two yards and freelanced for a number of years, and came into possession of Mozart, a 17.3hh Trakehner X Hanoverian stallion who was trained to Grand Prix, but with such badly damaged hind fetlocks he was lame as often as sound. On his better days he taught me so much I became totally hooked on dressage. I also learned about riding and handling stallions, and did some stud work with him before he died suddenly, aged 12, of an aneurysm in his gut. The autopsy showed severe worm damage, probably from as early as 2 or 3 years old, before he was imported from Denmark. I was devastated.

I had been teaching the children of a wealthy family at the time, and they offered me a full time post. I was to buy, train and look after ponies for them, and also a competition horse for myself. It was the most wonderful opportunity, and I grabbed it with both hands. I found ponies for each of the four (soon to be five) children, and for me, there was Benjamin. A 16.3hh Intermediate eventer, Benji had gone blind in one eye and was an insurance write-off being sold into dressage as a safer occupation. Nobody told him that! Buying a fit thoroughbred who has been ridden by a man is not the best choice for a 5’5″ lightweight woman. I sought help with Benji from a number of trainers, somehow managing to get him to Prix St Georges, but it wasn’t until I found the TTT (Teachers of Tomorrow Trust), that anyone was really able to help me. There, I learned all about the correct classical principles of training, biomechanics and teaching techniques. I started lessons with their visiting International trainers, Charles de Kunffy (the American author, clinician and International judge) and Arthur Kottas, First Chief Rider of the Spanish Riding School of Vienna. What an opportunity!
Then disaster struck again: Benji died of a twisted gut. He, too, was only 12 years old, and was just ready to start in Intermediare 1. It was back to the beginning again. My boss allowed me to buy a batch of 4 horses from Denmark, two of whom I trained and sold on, and bred a foal from another.

The fourth was Rossini, whom I broke and trained completely myself, qualifying for Nationals at all levels and finishing in the places in the Freestyle Championships at every level up to Prix St Georges. I continued to expand my knowledge with regular clinics with Charles and Arthur, with whom I worked for 30 years, and more recently also with Stephen Clarke. 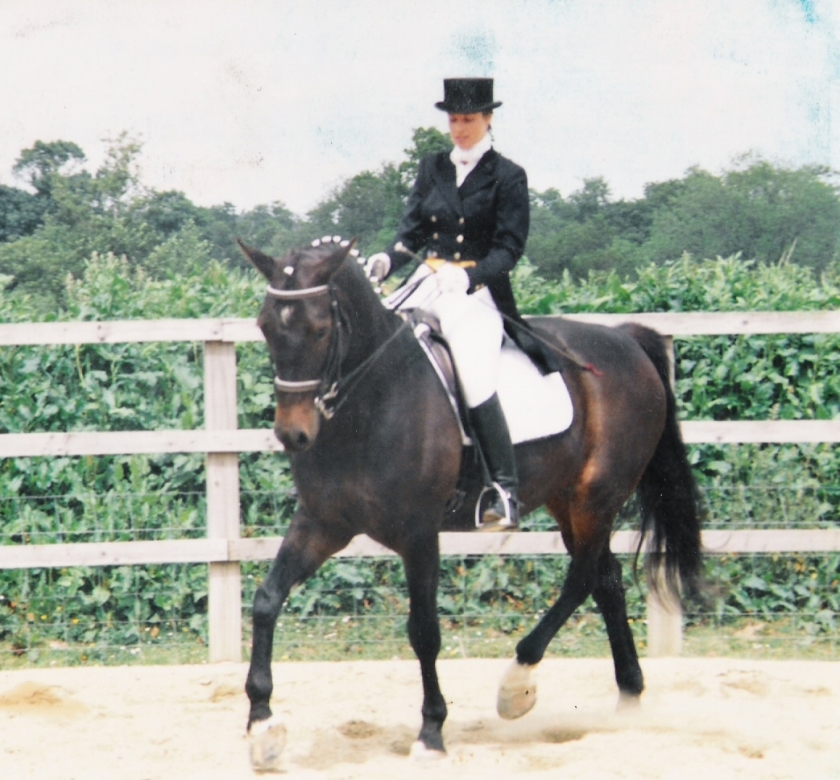 When Ross died suddenly, aged 10, my world collapsed. I couldn’t believe it could happen again. This time there was no explanation; he simply died of shock. Even an autopsy failed to show the cause, and to this day I have no idea why he died. I wasn’t sure I could start again, and although my job continued for a while, the children were growing up and it was obviously drawing to a close.

I took a holiday with a couple of friends who were also at crossroads in their lives. We chose Scotland and it captured our hearts – soon we purchased an old croft in the Highlands. The other two moved in permanently, and I commenced the crazy lifestyle of commuting every few weeks between the far south of England and the far north of Scotland!

Back in Sussex I was offered several rides and as I didn’t want to become so emotionally involved with a horse again at that time (losing Ross felt like losing a child), I took a couple of them up on the offer. One of these was Holme Grove Merlin, a 3-year-old 15.3hh Trakehner stallion with a whole heap of attitude. He had me on the floor so often I lost count, and by 4 ½, his owner made the difficult decision to geld him. It was the right choice, although he nearly died from an adverse reaction to the anaesthetic, and lost a year’s work in recovery.

After this, Merlin came on steadily, showing a real talent for the higher-level work. He placed almost every year in National Finals and in 2007 he helped me achieve one of my lifelong ambitions when we represented GB in the Small Tour in Spain (The Sunshine Tour), earning my Union Flag. We were delighted to finish 13th out of 47 competitors.

Subsequently, Merlin’s owner decided to sell him, and with the help of a couple of my wonderful clients and a big loan, I became his new owner. We moved up to Grand Prix and competed at that level for 7 years, earning 62 BD points at Big Tour over that time.

Merlin retired from that level at the age of 22, still fit and sound – a testament to his correct training after a busy life of travelling and competing. At 23 he undertook the Premier League circuit at Small Tour with a new rider, and at 24 took on another pupil at Advanced level, finally passing away at 25 from cancer.

For me as a judge, having achieved List 1 status in 2009, I now judge across the country at all levels and championships, and teach and mentor judges on their progress up the judge’s ladder.

When I have the time (!!!) I indulge my other passion: writing. I answered reader’s dressage questions in HORSE magazine for ten years, and wrote five features for them. My first book, THE BUILDING BLOCKS OF TRAINING, (foreword by Stephen Clarke) was published in 2007, and my second, THE SUCCESSFUL DRESSAGE COMPETITOR, with foreword kindly supplied by Carl Hester, came out in November 2009. My ‘Sunshine Tour Diary’ – self-published complete with over 40 photographs – gives a taster of the highs and lows, not to mention the complications, of a virgin International competitor. 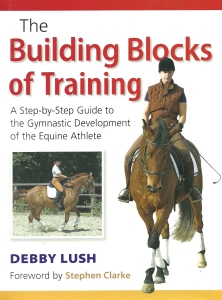 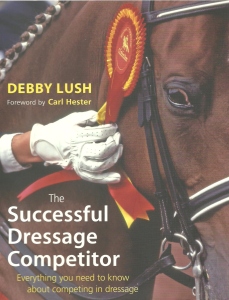 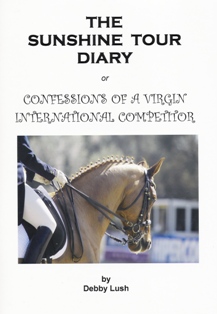 And if that were not enough, I also write fiction – epic and urban fantasy novels under my pen name of Deborah Jay – click through to take a look at what my fevered imagination can conjure up…